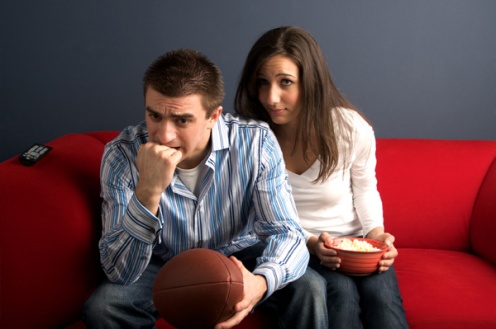 HOLLYWOOD, CA – Tilting her head slightly to the side so it’d appear that she was actually interested and paying attention, local girlfriend Katie Titus waited patiently for Shawn Williams to finish explaining why the Broncos would win the Superbowl this year. Though the couple has reportedly been dating for over 2 years, Katie never disclosed the fact that she f*cking hates football. “Since I’m from Massachusetts, I’m supposed to be some diehard Patriots fan but honestly, I couldn’t care less. It’s wicked annoying that a 15 minute quarter actually turns into a f*cking hour because they keep stopping the stupid clock. And football fans are the most annoying people in the world. You don’t need to get up and scream every time there’s a tackle or something. Plus, I hate when Shawn goes to a bar at 10 in the morning and has beer with his eggs.” At press time, Shawn was clapping loudly about a touchdown while Katie contemplated how many Sex & The City reruns she’d force Shawn to watch later that day.